Strolling through the small back streets on the Left Bank last week, enjoying the last remnants of summer and the many galleries and antique shops in this part of Paris, I stopped outside the Willy Rizzo Studio to admire the beautiful face of Bridget Bardot captured by the photographer in a series of magnificent sunny photographs taken in Saint- Tropez.

The small exhibition captures the magic of this tiny fishing village which from 1949 became the favourite haunt of the young and beautiful.

Pablo Picasso, Marilyn Monroe, Jane Fonda, Yves Saint Laurent, Alain Delon, Roger Vadim, Jack Nicholson, Bridget Bardot are just some of the many famous and glamorous faces Rizzo photographed.   Gazing at the photographs in the Studio the sense of party and timelessness still radiates from these images, Roger Vadim or Alain Delon holding court at Café Sénéquier could certainly have been snapped at a party during this summer’s holiday celebrations.

Saint- Tropez has never lost its attraction, over the passing decades Bridget Bardot is still immortalised as the beehived barefoot beauty who changed this quiet modest fishing town into one of the most glamorous resorts on the Cote d’Azur.

Willy Rizzo’s daughter, Camilla was in the Studio during my visit last week – she mentioned the photographs will be moving to Saint-Tropez this week as the resort starts it’s countdown diary of parties and celebrations to mark the end of the 2017 season.

A further photographic treat is imminent in Paris marking the centenary of the birth of Irving Penn, one of the greatest photographers of the twentieth century, with an exhibition of his work at the Grand Palais opening on the 21 September. It will be the first major retrospective of the American artist’s work in France since his death.

Walking back from a further visit to The Perfume Museum last week, I turned into a beautiful cobbled courtyard off rue du Faubourg Saint-Honoré and discovered the charming perfumery, Rose Desgranges.

The small boutique houses just the one fragrance, a fresh, fruity, silky rose which the elegant Madame Patricia Meyer sprayed onto a silk ribbon and tied around my wrist.

The fragrance was created exclusively for Rose Desgranges by her husband Albert Meyer in 1958.   Delighted with the fragrance Rose decided in 1961 to open a small shop on Faubourg Saint-Honoré to showcase her perfume. 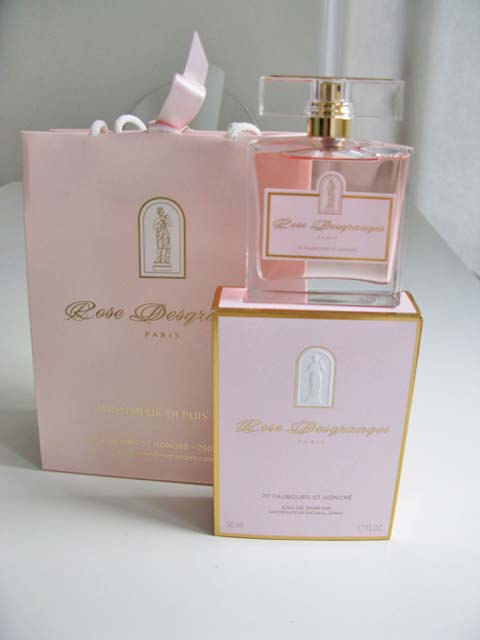 Over recent years the descendants of Rose Desgranges, her daughter, Patricia Meyer and a granddaughter nurtured the idea to rekindle the family fragrance and with the expertise of perfumer Benoist Lapouza work began on reinterpreting the original formula.

Reinterpreting a vintage fragrance for the modern world without doing an injustice to the original elixir is a challenge, some raw ingredients are now prohibited and some concentrations no longer comply with today’s legislation. In December 2014 the vintage fragrance was revived in its original setting at 70 rue du Faubourg Saint-Honoré.

I believe Benoist Lapouza has successfully re-created the original glamorous 1950s perfume in the finest fragrance tradition utilising the best quality raw materials and in so doing he has encapsulated the memories of childhood years for the family and guardians of this beautiful perfume.

If your preference is for a rose fragrance this perfume will not disappoint, it is a sensual floral, the opening notes of Rose, Bergamot and Mandarin are fresh and fruity with a champagne sparkle, the heart notes of Ambretta, Jasmine, Iris and Ylang Ylang are followed by the wonderful Vanilla Absolute, Musk, Patchouli and Oakmoss. Rose fragrances can often be disappointing as they age on the skin, the dry down of this perfume retains its glamorous image throughout.

Top image – Serge Gainsbourg’s house on rue de Verneuil is still a grafitti hot spot and artists continue to pay homage to the singer – he lived in the house from 1969 – 1991, the year of his death.